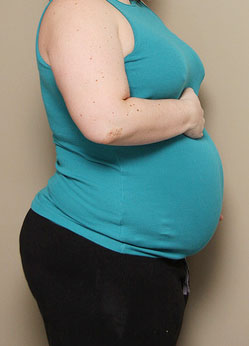 Gestational diabetes (diabetes that occurs during pregnancy) is on a steep uptick. CDC estimates that a rapid climb is about to occur from about 7% of pregnancies to about 18% - or one in seven pregnancies (1).

Why is GDM, as it’s often referred, on such a rapid rise?

How Is GDM Diagnosed Now?
Several international organizations, including the American Diabetes Association, has recommended that most women who are pregnant be tested for GDM (3,4). Women who are known to be at high risk for diabetes should be checked for GDM or undiagnosed type 2 (see discussion of “overt diabetes” below). Women who are not known to be at risk for diabetes should be tested for GDM (between 24 and 28 weeks of pregnancy) using a glucose tolerance test.
The new recommendations suggest that the pregnant woman be given an oral glucose tolerance test which consists of consuming 75 grams of glucose and having their glucose measured 3 times over 2 hours (fasting, 1 and 2 hours). They also recommend that only one result needs to be elevated rather than two in prior criteria.

The glucose levels at which GDM can be diagnosed are (3,4):

Though these recommendations have come from an extensive review and an international body of experts, the American College of Obstetricians and Gynecologists have not adopted them. If you are pregnant and being tested for GDM ask what organization’s recommendations your healthcare provider is using.

Type 2 Diagnosed During Pregnancy, Now Named Overt Diabetes
With more women getting pregnant later in life, more women who are overweight when they get pregnant, and more woman in the U.S. of ethnic groups with high incidence of diabetes, healthcare providers are making the initial type 2 diagnosis when women become pregnant and seek healthcare. Is this GDM or type 2 diabetes? It’s type 2 or as the new international and ADA guidelines name it (3,4), overt diabetes (it’s not a new diabetes category). The criteria to diagnose overt diabetes is identical to diagnosing diabetes in non-pregnant woman(4):

Women diagnosed with over diabetes don’t need to have a glucose tolerance test. They do need to understand that they have been diagnosed with diabetes. They will have diabetes during their pregnancy and continue to have it throughout life.

Why Should Having GDM Cause a Woman Concern for the Future?
Several reasons:

Yes, the yellow warning flag about gestational diabetes is being waved. Please heed the warning. Preventing GDM can reduce risks of diabetes to the next generation. Reducing weight after pregnancy can prevent or delay type 2 diabetes.