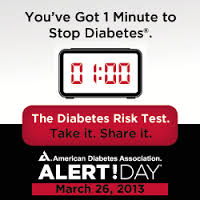 While we were experiencing a much ado about nothing “snow storm” in Washington, DC on March 6, 2013, hundreds of diabetes advocates were storming Capitol Hill for a cause we should be doing much about.

To kick off their advocacy day the American Diabetes Association’s (ADA) released findings from a report they commissioned, Economic Costs of Diabetes in the U.S. in 2012, at a press conference. Joining ADA leaders at the press event were Ann Albright, PhD, RD, director of CDC’s Division of Diabetes Translation, Judith Fradkin, MD, director of the National Institutes of Health’s division which encompasses diabetes (NIDDK) and several key members of the Congressional Diabetes Caucus, Senator Susan Collins (R-ME) and Senator Jean Shaheen (D-NH) (who has a granddaughter with type 1 diabetes I learned at AADE's advocacy day in 2012).

The stats presented by ADA are downright scary! It is, without a doubt, time to sound the alert about our prediabetes and type 2 diabetes epidemics louder and louder.

Check out a few key stats.* Read through these slowly and repeatedly, it takes a few readings to absorb their impact!

And as if these stats aren’t mind blowing enough, other data shows that we are nowhere near getting a handle on controlling this epidemic. According to the ADA press release (and CDC), recent estimates project that as many as one in three American adults will have diabetes in 2050!

When oh when will we begin as a nation to take diabetes seriously?

We increasingly need to sound the diabetes alert – to raise awareness of prediabtes and type 2 diabetes. It’s clear that we’ve not been sounding the alert loud enough.You’ve got another chance to do so just around the corner.

Yes, ADA’s Diabetes Alert Day is Tuesday, March 26, 2013. ADA refers to this day as “a one-day "wake-up call" to ask the American public to take the Diabetes Risk Test to find out if they (a family member, friend, co-workers, anyone) is at risk for developing type 2 diabetes. Point people to the Diabetes Risk Test which takes no more than 30 seconds to complete the handful of questions about current weight, age, family history and other potential risk factors.

But, please don’t wait for Diabetes Alert Day or Diabetes Month in November to sound the alert or take action with your own health, feel free to join me in sounding the alert about overweight, prediabetes and type 2 EVERYDAY. We know today that there is stronger evidence than ever before that the earlier a person knows they are at risk for or has prediabetes or type 2 diabetes, the earlier they can take healthy lifestyle actions to reverse or slow/delay the progression of both prediabetes and type 2.

And if you are inclined to take action on pending legislation, keep a watch on Federal diabetes legislation at the Congressional Diabetes Caucus or ADA’s Advocacy efforts. I encourage you to take action wherever, whenever you can.