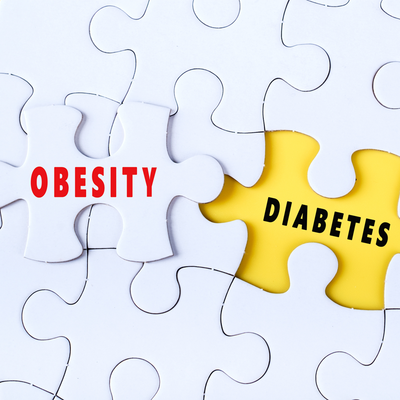 Consider these staggering stats that capture the worldwide prediabetes and diabetes epidemic:

Global Call to Action to Prevent or Delay Prediabetes and Type 2 Diabetes Progression
Without a doubt, overweight and obesity track closely with the onset and diagnosis of prediabetes. Nearly 90% of U.S. adults 18 years and older with diabetes (type 1 and 2) are overweight or have obesity.2 A multitude of factors promote rising rates of overweight and obesity including excess calories, inadequate physical activity, sedentary lifestyles, and the list goes on...

Here’s the pressing question: As the pandemics of prediabetes and type 2 diabetes fast approaches what actions can people and populations take to prevent or delay these conditions? For starters, don’t think of them as two diseases. Prediabetes and type 2 diabetes are a continuum that may be kicked into gear due to genetics (family history) and further exacerbated by excess weight. This situation typically triggers a cascade of effects that results in insulin resistance (the body’s inability to use the insulin it produces), and in response overproduction of insulin. That is until the body can no longer produce sufficient insulin to keep glucose levels in a normal range. It’s at this juncture that prediabetes progresses to type 2 diabetes. 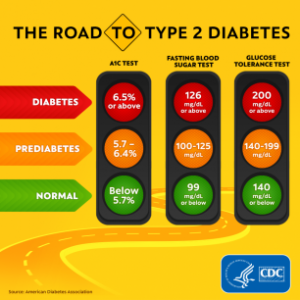 Need positive news? Here it is!

About prediabetes: Long term studies conducted around the globe from China to Finland and the U.S., over the last 30 plus years, focused on whether type 2 diabetes could be prevented or delayed in people at high risk or with prediabetes.6 While the studies differed slightly in their designs, all had as their foci lifestyle changes, including actions to make healthier food choices, improve eating habits and become more physically active with the end goal to promote weight loss and keeping lost pounds off. In sum these studies showed that losing at least 5% of body weight, even with some weight regain over time, can prevent or delay progression of prediabetes to type 2 diabetes.

About type 2 diabetes: Two large studies were conducted among people in their early years with type 2 diabetes. The one conducted in the U.S. is Look AHEAD7 and the study conducted in the United Kingdom is DiRECT UK.8 The bottom lines? Both studies showed that with weight loss (at least 5-7%), and keeping off as many of those lost pounds as possible overtime, people either prevented or slowed their progression of type 2 diabetes. Some even put type 2 diabetes into remission.8 Of note, losing 5% of weight or more has been shown to significantly improve A1C (average glucose levels), blood lipids and blood pressure and more. For some people these benefits often occurred with the use of less and/or fewer medications to manage one or more of these conditions.7-9 More weight loss (7% or more) produces an even longer list of clinical, physiological and psychological benefits.7-10

What to Eat with Prediabetes and Type 2 Diabetes
The American Diabetes Association in 2019 published their update on nutrition guidance - Nutrition Therapy Consensus Report For Adults With Diabetes and Prediabetes.10 The report underscores four key messages that I collectively refer to as, “eating pattern common denominators”:

These “eating pattern common denominators” focus squarely on actions to take when choosing carbohydrate-containing foods. This guidance concludes that reducing (not severely restricting or eliminating!) the total amount of carbohydrate one eats has the most support for improving glucose levels long term.10 A second focus is on quality. Choose sources of carbohydrate that contain one or more of the following: whole grains, dietary fibers, and vitamins and minerals. Keep sources of carbohydrate that contain added sugars, unhealthy fats and sodium, to a bare minimum.

But there’s now a new twist to the discussion about high quality sources of carbohydrate to mention. That is a well-researched food and beverage ingredient, called PalatinoseTM (brand name for isomaltulose). Research shows that by regular consumption of a sufficient amount of this slow-release source of high quality carbohydrate, can reduce the rise of blood glucose after eating more so than some sources of healthy carbohydrate.11-17

More about Palatinose™ – A Slow Release Carbohydrate
Research on the ingredient isomaltulose, conducted over the last few decades, shows that it releases its energy (calories) more slowly than other carbohydrate-containing ingredients.12 For people with prediabetes and type 2 diabetes, the slower release of energy can offer two benefits. One is to provide a more sustained supply of energy over the next few hours after consuming a product with the ingredient.12-14 Two is a slower and overall lower rise in blood glucose after consuming the food.  Research shows that these two benefits result in less insulin (made by the pancreas) being needed and released.14,15,17 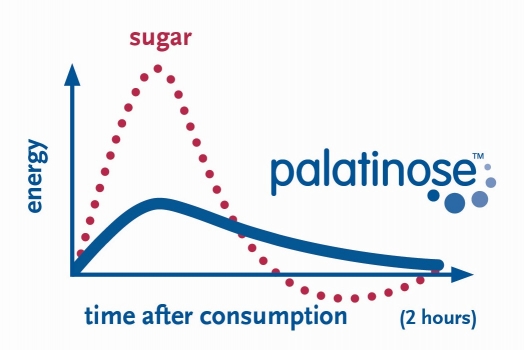 The cascade of events that occur after consuming Palatinose™ results in a healthier response from several gut hormones, known as incretins.11,17 It produces a lower release of the hormone, Gastric Inhibitory Peptide (GIP) in the upper part of the small intestine and a larger release of Glucagon-like Peptide-1 (GLP-1) in the lower part of the small intestine. Add to these benefits Palatinose™ also burns more energy (calories) from fat, when being metabolized.13 This benefit has been linked to a small amount of weight loss when it is replaced for sugar (sucrose) in an eating plan.

As an ingredient for food and beverage manufacturers, Palatinose™ is made from naturally occurring sugar beet18 Manufacturers are using Palatinose™ in an increasing number of foods and beverages as a naturally sourced high quality carbohydrate ingredient. It is typically used in place of ingredients like maltodextrins or traditionally-used sugars that raise glucose more quickly, to take advantage of Palatinose’s™ slow glucose release properties. Replacing foods that use the ingredient Palatinose™ for those that contain high quality carbohydrate but are quickly absorbed may help people with prediabetes and diabetes reduce glucose fluctuations and decrease insulin needs over the course of the day.11-17 To find products with Palatinose™ search on the term ‘isomaltulose’ and look for ‘isomaltulose’ on product ingredient labels. Taking this action is certainly worth a try!

Disclaimer: Hope Warshaw was compensated for the development and promotion of this blog from Beneo Institute, the manufacturer of Palatinose™.