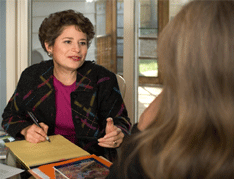 Hope applies her training and expertise as a dietitian, certified diabetes educator and weight management counselor to help clients manage the many aspects and challenges of these health conditionns. Below are answers to commonly asked quesetions that Hope share with clients about prediabetes, diabetes, diabetes diets, diabetes meal planning and healthy restaurant eating. You'll also find some reliable resources on these topics.

Contact Hope if you want to learn more about her counseling services.