Book Review: Not Dead Yet by Phil Southerland and John Hanc

This is one in a series of book reviews. You may find these books beneficial if you: manage prediabetes or diabetes, follow a diabetes meal plan and/or try to eat healthy to live well. These book reviews also appear on amazon.com and the books can be found in my amazon a-store. Please check them out and consider a purchase.

Today there aren’t many people actively involved in the U.S. diabetes community, particularly those in the diabetes online community (DOC), who don’t know Phil Southerland and his thriving organization Team Type 1. In a few short years, Team Type 1 has morphed into an awe-inspiring force which has gone way beyond its bike racing roots and is now speeding ahead internationally. 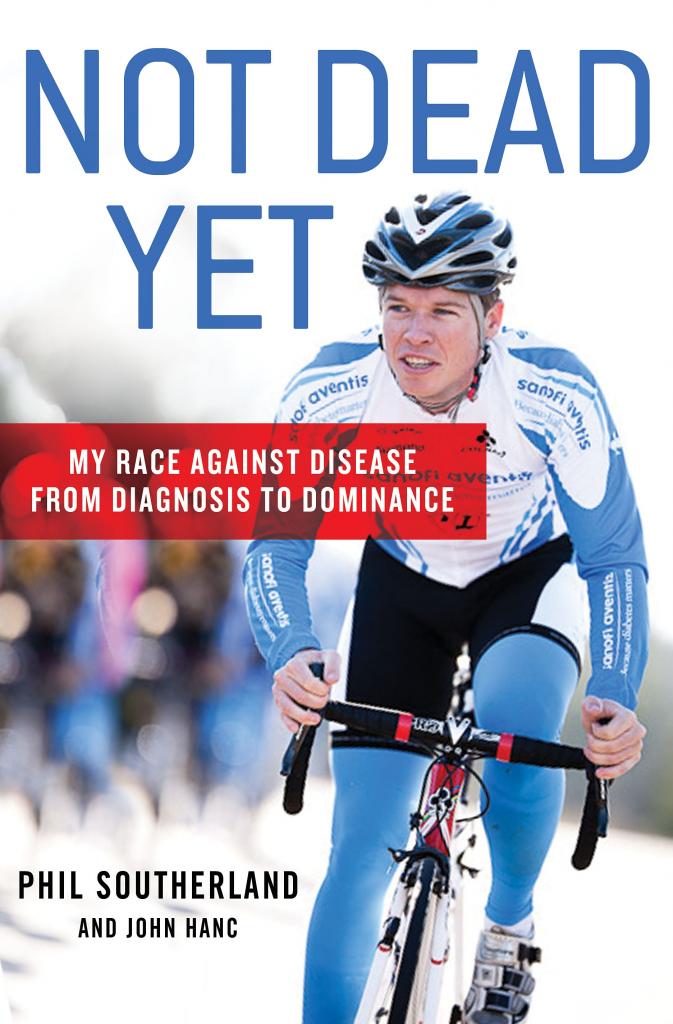 As Phil concludes his book, he describes Team Type 1: “Not bad for an organization that began [in 2004] as a vague idea in the over exercised mind of a twenty-two-year-old during a crazy, three-hundred-mile ride home.”

But I’ve jumped ahead. Not Dead Yet takes off in the first few months of Phil’s life – just seven months in. That’s when he was diagnosed with type 1 diabetes.  Phil describes his diagnosis as one of the youngest recorded back in the 1980s. With comparatively rudimentary insulins and monitoring tools, Phil and his amazing mother, Joanna, embarked on their journey of managing Phil’s diabetes and life.

Yes there have been many ups and downs along the way which are fully described in the nearly 300 pages of Not Dead Yet.

Throughout the book Phil gives his mother accolades for being his rock of support through thick and thin. She was courageous, knowledge-seeking and scrappy from the day type 1 diabetes entered their lives. And she did this as a single-parent with next to no financial resources after she ostensibly had to kick Phil’s alcoholic father out of the house (Phil has recently reestablished a relationship with his Dad and in fact, as described in the late pages of the book, sought counsel from him about concerns he [Phil] had about his overindulgence in alcohol).

As Phil’s life story unfolds the reader gets the strong feeling that much of his mother’s persevering personality rubbed off on Phil. Yes, the apple doesn’t seem to fall far from the tree!

Phil describes, of extreme detail, his childhood, challenging adolescent years, and college escapades at University of Georgia. He delves into his initiation into biking in adolescence and how this outlet evolved into his passion.

Phil’s warm heart comes (perhaps it’s that baby face?) through particularly strong when he introduces the reader to adults who entered his life and served as role models and supports to both he and his mother. Phil notes, it took a village to raise him.

As someone who has watched Phil and Team Type 1 from a distance (clad in their biking gear, diabetes devices and positioned on their bikes at the Abbott and OmniPod booths at national diabetes meetings) come on the diabetes scene to evolve quickly into someone who has built an internationally known and respected diabetes organization, I especially enjoyed reading a few sections. Among them: how Team Type 1 went from brainstorm to reality; raising funds for (the story about Holly Kulp, her husband and Abbott brought tears to my eyes); organizing, running and winning Race Across America (RAAM) #2 (you had my blood pressure rising here), and the evolution of Team Type 1 and now Team Type 2.

I would have enjoyed reading a bit more depth about how Team Type 1 evolved to its present status. But, I guess I’ll have to wait for part 2, which for the moment I’ll title, Still Alive. Suffice to say, Phil is already a diabetes champion in many senses of the word!