Confused about, as a client referred them: “those sugar alcohols”? If so, check out my cut to the chase answers below:

What are Sugar Alcohols?
Sugar alcohols, also called polyols, are neither sugar or alcohol. They’re called sugar alcohols because part of their structure resembles sugar and part alcohol. Keep in mind they do contain carbohydrate.

Today polyols are in “sugar-free” foods, such as candy, cookies, ice creams and gums. They’re used alone or combined with a sugar substitute (e.g. sucralose, aspartame) to both sweeten and provide bulk (volume). (FYI: you couldn’t make a sugar-free ice cream or cookie with a sugar substitute only. The polyol provides necessary bulk.) Commonly used polyols are sorbitol, erythritol, and mannitol.

However, because people most often eat foods that contains sugar alcohol on occasion vs. regularly, the American Diabetes Association notes: “there’s no evidence that the amount of sugar alcohols likely to be consumed reduce glucose, calorie intake or weight.” And it’s certainly easy for people to fool themselves because foods with sugar alcohols often brag about being “sugar-free” (see next: What’s the meaning of “sugar-free”?)

“Sugar-free” means contains no or less than 0.5 g/serving of sugars. Sugar alcohols, because they aren’t one or two unit sugars, don’t count as sugars. But that doesn’t mean they’re calorie- or carbohydrate-free!. 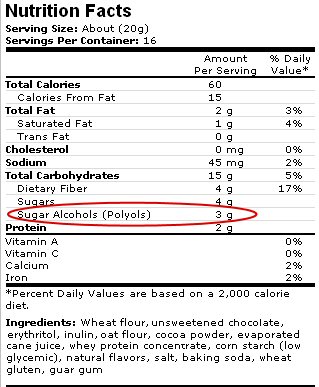 Learn more:
Check out Calorie Control Council’s - a trade association for the sugar alcohol industry and my book Diabetes Meal Planning Made Easy.